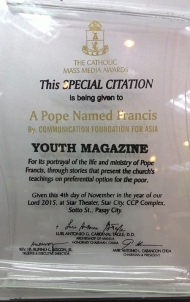 held Nov. 4 at the Star Theater. The comics magazine presents Pope Francis as a model of the Church’s teachings on preferential option for the poor.

“A Pope Named Francis” is still available in English and Filipino versions at the Communication Foundation for Asia, St. Paul’s and Paulines bookstores.

In addition, CMMA also recognized CFA’s participation in the Special Documentary Team that covered the Papal visit in January.