Launched in 1980, Gospel Komiks has been synonymous with Catholic education, teaching and explaining to Filipinos the challenges of the weekly Sunday Gospels through the easily understandable medium of comics. Today, Gospel Komiks will reach new heights in having inspired a new TV show entitled, “Gospel Komiks TV: Mga Kwento ni Ate G”

“Ate G” with the Kids

Gospel Komiks TV: Mga Kwento ni Ate G is a 30-minute children’s show centering on values derived from Gospel stories, using storytelling and art as main tools for interpretation. The show stars Ate G (played by Carla Lizardo), who tells stories to children from a ‘GK book’, a book inherited by her family from a travelling missionary. From it, Ate G reads stories that children can learn lessons from. The GK book takes its stories from the Bible.

The first season of Mga Kwento ni Ate G will soon air on TV Maria. The exact dates and time of their showing will be posted soon.

In union with the Church in celebration of the coming 51st International Eucharistic Congress, the Communication Foundation for Asia has published “The Eucharist and You: A Visual Guide to the Heart of Our Catholic Faith.” This Gospel Komiks special edition aims at giving readers a better understanding and appreciation of the Blessed Sacrament.

The magazine focuses on the most essential aspects of the Eucharist by explaining the real presence of Christ using miracle stories. It inspires every Christian to make the Eucharist part of his or her life by living for Jesus and expressing love to one’s neighbors.

Their works will be published in Gospel K Magazine in the school year 2015-2016, and will be posted in CFA’s B.I.D.A. social media accounts.

Back in the August-September 2014 issue of Gospel Komiks and Gospel K Magazine, we challenged our readers to make a poem about their love for Jesus. A poem made by a grade 9 student from Saint Michael Academy of Catarman, Northern Samar caught the eye of our writers and editors. Written by Regine Valerie Arcebuche Arninio, the poem is an honest and open expression of her love and relationship with our Lord Jesus Christ.

I know He’s always there for me, even though I couldn’t see.
I know that He’s inside my heart
and no one can be able to break us apart.

When I am lonely and depressed,
He’ll comfort me and make me feel blessed.
And when I cry due to my fears,
He’d make me stop and wipe my tears

He comforts me when I’m sad,
He’s also there when I am glad.
He calms me down when I am angry
and teaches me how to say sorry.

I’m so lucky He’s my best friend.
I know His love for me will never end.
And I also want to let you know,
my best friend Jesus is your best friend, too.

In this month’s issue of the Gospel Komiks and Gospel K Magazine’s Rakrakang Papuri we challenged our readers to make their own cover of the song “How Great is Our God” by Chris Tomlin.

We at CFA thanks Danna Jean and Divine Joy for their excellent rendition of the song. 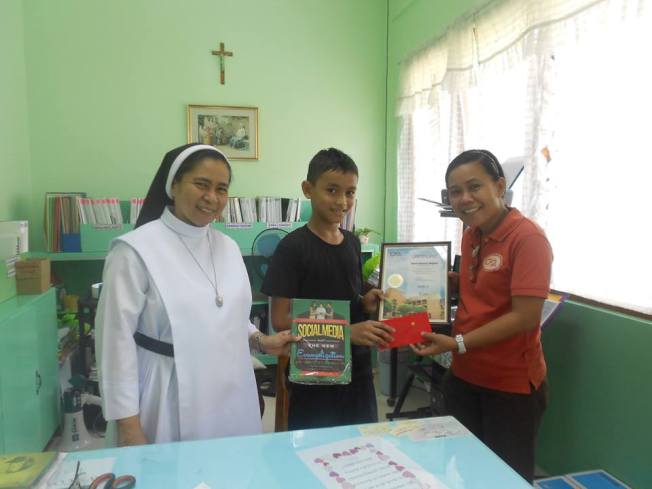 Steve Francis Mejias and Sr. Josephine Ativo, AR from Blessed Trinity College together with Medina Quilantang from our own Sales Team

Steve Francis Mejias, Grade 7 student from Blessed Trinity College, Bohol makes our judges proud with his answer Kabataang Courteous Friendly to All Always ready to help his or her fellowmen. Through his answer he is inspiring volunteerism especially among the youth. Due to recent events, volunteerism and helping our countrymen is one of the most valuable traits we can have. This selfless act continues to uplift our sense of camaraderie and as one family, the Church of God.

Congratulations to Steve and thank you to all who joined.

The Communication Foundation for Asia recently announced the winners of the Kabataang C.F.A. contest. The contest invited suggestions from students to develop youth-oriented slogans from the acronym “CFA.” The winners are:

Three days a week, for about an hour each time, four young Artists from CFA’s Publications Department meet, with the aim of moving up from the static magazine illustrations they have been accustomed to, and migrating to the world of moving and talking images—animation.

CFA has long wanted to produce animated shorts and features, partly because, as one Management official said, “animation and young people invariably go together, and young people make up our primary target audience.” CFA also has a large treasure trove of comics stories and illustrations created over so many years—waiting to be translated to another medium.

Several years ago, CFA produced several episodes of “Gospel Komiks—The TV Series,” an attempt to combine animated stories from its printed Gospel Komiks, with live discussions of the Gospel by selected high school students. Because of limited production time and resources, the animation was limited to camera movements like pans and zooms.

This time, using the same software that commercial animators use, the four CFA Artists—Boogie Policarpio, Nikki Paje, Rhichie Pinpin and Bong Cafe–hope, by year’s end, to come up with something better–the first CFA animated short. “And from there,” the CFA official said, “it’s only a few steps away from games and apps, which CFA is also very much interested in doing.” But that’s another story.

Starting next school year, you can enjoy reading your CFA magazines on your tablets, smartphones and PCs. Initially, CFA publications for elementary and high school students will be available in digital versions. These are Gospel Komiks (English and Filipino), Gospel “K”, Gospel Now and Pambata. The digital versions will come in the most popular E-book formats: PDF, EPUB, MOBI (for Kindle) and EPP. Subscribers can choose between downloading the magazines from the Web, or receiving them on CDs. To subscribe, inquire from your friendly CFA Sales Associate, or contact sales@cfamedia.org.

In the August-September issue of CFA’s Gospel K magazine, a comics adaptation of the novel “The Four Horsemen of the Apocalypse” is the lead story for a discussion of the Gospel for the 20th Sunday in Ordinary Time (Luke 12:49-53).

The story, originally written by Argentine Vicente Blanco Ibanez, is set in World War II. It tells of a conflict within a family, between those who stand for peace, and those who advocate tyranny. It is presented to illustrate Jesus’ words in the Gospel: “Do you think that I have come to establish peace on the earth? No, I tell you, but rather division. From now on a household of five will be divided, three against two and two against three; a father will be divided against his son and a son against his father…”

To reserve your copy of the full issue, contact CFA Sales: sales@cfamedia.org.

The World of CFA Magazines
Blog at WordPress.com.