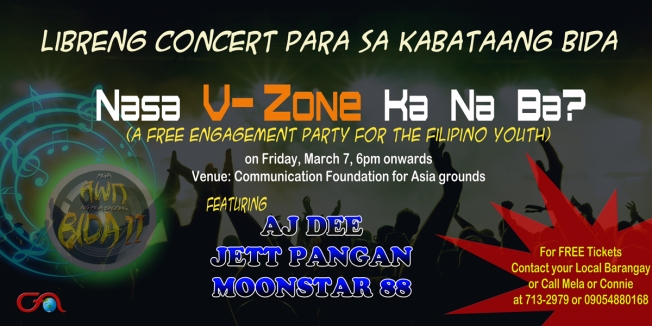 Finally after months of deliberation and online voting, CFA will declare the winners of the Awit ng mga Bagong Bida 2: Music Video Making Contest. The top 10 finalists coming from different schools nationwide will be presented here live at Communication Foundation for Asia grounds on March 7, 2014 (Friday). Dubbed “Nasa V-Zone Ka Na Ba” A Free Engagement Party for the Youth, the event is open for all interested participants especially the youth. The free concert aims to inspire volunteerism among the youth and promote the importance of good governance, both which are highly relevant to the current issues our nation is facing. For Free tickets, call 7132979 or 09054880168 and look for Mela or Connie.

Culminating the concert are Moonstar88, the band made famous by chart topping hits like “Torete”, “Sulat” and “Migraine”, and Jett Pangan one of the country’s well known musician. Hosting the event is Actor and Host AJ Dee.

Good luck to all the entries and See You this March 7.

The top 10 entries for the Awit ng Bagong Bida 2 contest are finally revealed! Over the course of a month the judges have finally picked the top 10 entries among the 25 music video entries submitted. All entries are original compositions and music videos created by the Filipino youth from all over the country. Facebook and Twitter pages have been set up to feature the contestants creativity and passion for engaged citizenship and promotion of good governance through video and music, the youth’s most favored language of expression.

Forty percent (40%) of the final score given to the entries will be based from the online vote so be sure to vote the MTV that inspires you to become an engaged citizen and work for good governance.

The three highest overall scores will be named winners. The overall Champion will receive P 30,000 while the 2nd and 3rd prize winners will receive P 20,000 and P 10,000 respectively.

All entries for the CFA MTV contest “Awit ng mga Bagong Bida 2” are finally in! With this comes the launch of its own Facebook page. The contest was launched last November 2012 by the Communication Foundation for Asia in cooperation with The Parish Pastoral Council for Responsible Voting (PPCRV) and The Catholic Educational Association of the Philippines (CEAP).

Aimed to set an example of pro-activeness among the Filipino youth on the social issues of our country, it’s main themes are promoting good governance and engaged citizenship. The entries came from all over the country mostly from students.

Like the Facebook page to get the latest updates from the contest. All 25 entries have been posted on the page. Feel free to like the videos you want and post your pick of who do you think deserves to be the overall champion.

The top three entries of the 2013 songwriting and MTV contest will receive cash prizes plus plaques of recognition. The overall Champion will receive P 30,000 while the 1st and 2nd placers will receive P 20,000 and P 10,000 respectively.

Good luck to all the candidates! 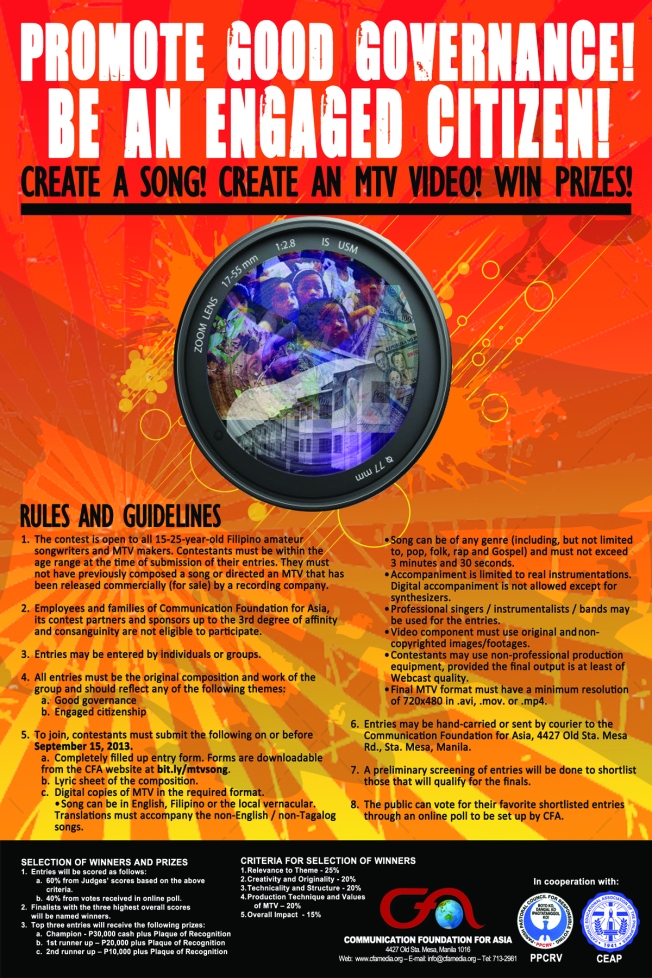 The deadline for the Good Governance Music Video Contest is extended to September 15, 2013 to accommodate requests from schools and students.

The contest was launched back in November 2012 by the Communication Foundation for Asia in cooperation with The Catholic Educational Association of the Philippines (CEAP) during its NCR Youth Summit. It was also endorsed by the Parish Pastoral Council for Responsible Voting (PPCRV) in March 2013 during its regional youth rallies. This contest is open to all 15-25 year old Filipino amateur songwriters and MTV makers. They must not have previously produced a song or MTV that has been released commercially (for sale) by a recording company. Songs can be in English, Filipino or the local vernacular.

This is the second national youth songwriting contest created by CFA with themes on Good Governance and Engaged Citizenship. CFA held its first national youth songwriting contest back in 2009. The top 10 finalist songs of the contest were compiled in the album, titled “Awit ng mga Bagong Bida”. It went unchallenged to win the Best Secular Album during the 2010 Catholic Mass Media Awards.

The top three entries of the 2013 songwriting and MTV contest will receive cash prizes plus plaques of recognition. The overall Champion will receive P 30,000 while the 1st and 2nd placers will receive P 20,000 and P 10,000 respectively.

Please click here to download the Registration form together with the rules and guidelines of the contest.